The Midlands Rail Hub gained more political momentum today as Shadow Transport Secretary joined calls for the project’s completion. In a visit to Birmingham city centre Jim McMahon took a tour of Birmingham Moor Street station, which could welcome up to 10 extra trains every hour once the scheme is delivered, with the full project creating space for over 12 million more train seats annually. 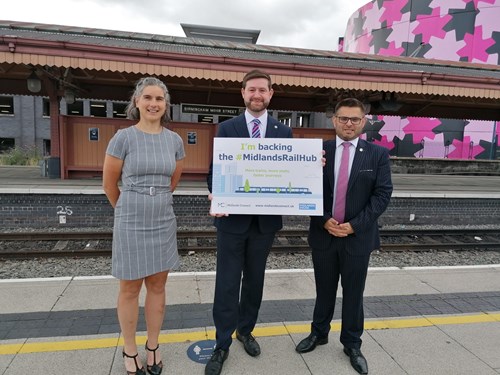 The project, set to cost in the region of £2bn involves series of upgrades to the rail network and the building of two new train paths into Birmingham City Centre. This, along with upgrades to track, signalling systems and new passing places will improve connections from Birmingham to the likes of Bromsgrove, Hereford, Worcester, Cheltenham, Leicester, Derby and Nottingham.

Under the project, passengers will enjoy quicker journeys, more frequent services and new connections, including the reinstatement of rail direct rail links between the three major cities of Coventry, Leicester and Nottingham. The Midlands Rail Hub will also create space for over a million lorries’ worth of cargo to be moved on our railways each year.

Jim McMahon also visited ongoing construction by Midland Metro Alliance, working on behalf of Transport for West Midlands, on the Birmingham Westside Metro extension, set to link communities and commuters on Birmingham’s Broad Street and Hagley Road to the wider tram network. The new route will serve three new stops, at Brindleyplace, Five Ways and Edgbaston Village and is set for completion by the end of the year.

“It’s abundantly clear that in this climate emergency, we need to take bold steps to change the way we live, work and travel. The Midlands Rail Hub is an absolute no-brainer – it will get more people and parcels off our roads onto our railways and create space for faster, more frequent train journeys across the Midlands and beyond. At a time where we’re looking to boost public transport use, this scheme must go ahead, it’s crucial for the region’s future.

“Talk of ‘levelling up’ is meaningless if people across the West Midlands are still unable to access job or training opportunities because of a creaking regional transport network. That’s why it’s critical that more projects like the Midlands Rail Hub are delivered at pace.

“It’s also great to see the work that’s being done to extend Birmingham’s tram network both in the east and west sides of the city and to hear about work already underway improving tram links in the Black Country. However, ensuring swift delivery is crucial if local communities are to reap the benefits sooner.”

“It’s fantastic to have cross-party support for the Midlands Rail Hub, it’s a project of huge importance as we look to address the climate crisis, promote greener travel and maximise the benefits of HS2. We know it’s crucial that we maintain momentum to move the scheme forward at pace, and we’re keen to develop and deliver this game-changing scheme as soon as possible. Currently, fewer than one in five journeys between towns and cities in the Midlands are made by train – this has to change. This project will make it easier for travellers to leave their cars at home, creating faster, more frequent connections across the region and creating 12 million more seats on our railway network each year.”

“Our teams have continued to work incredibly hard in challenging times to deliver Metro extensions in the city. It is fantastic to share a view of a near-finished product on Broad Street today and highlight an area of Birmingham really transformed through the addition of a tramway.

“Although clearly in a different stage of development, it was a positive experience to share an insight into the works for the complex delta junction at Lower Bull Street in the city centre with the first pre-made track bed units being installed today. All of us at the alliance share great pride in delivering such a transformative public transport projects for the benefit of Birmingham.”